Why Your Team Needs Agile Coaching As Much as Training

Training and education have long been crucial elements of Agile transformation.

Getting everybody on the same page through a formal educational moment is practically a right of passage. Trainers around the world (including our own Sherpas) strive to create entertaining teaching moments to launch teams on their Agile journey.

But no matter how fun your activities are, how many “a-ha” moments they create, or how in sync a team is after a training session, it’s just a small fraction of the overall learning journey.

A successful, sustainable Agile adoption relies on a combination of receiving new knowledge and learning how to apply it. Teams need a balance of training and coaching.

Although most marketing leaders recognize the difference between coaching and training, many rely heavily on training and neglect the coaching half of the equation.

This disparity is in stark contrast to recent data about the ROI of coaching as an invaluable follow-up to training.

As a result, many organizations that have placed an emphasis on training alone wonder why it doesn’t often “take” after it’s over.

The training/coaching mix inside your organization is the key to making any Agile journey a successful one. In this article, we’re breaking down coaching to prove, based on data and our own experience, that it’s just as important, if not more so, than the training that usually precedes it.

Differences Between Coaching and Training

Both coaching and training have a significant impact on whether your team reaches true marketing agility or not.

But they tackle the goal from different directions, and actually look very different: 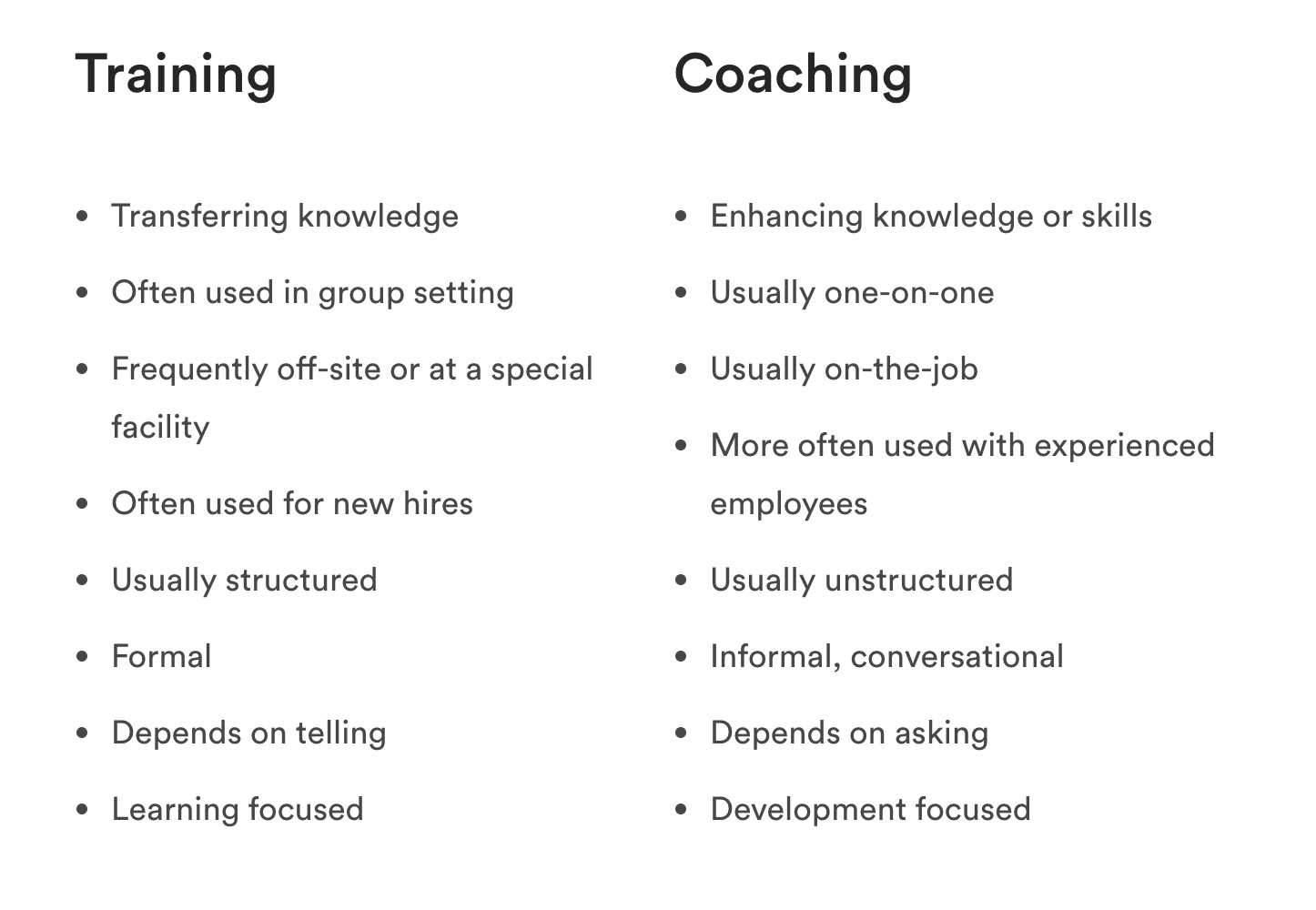 Training is about transferring knowledge to create shared understanding among a large group of people about a common subject.

Coaching, on the other hand, focuses on enhancing knowledge and developing skills in an area where basic knowledge already exists.

Coaching and training go hand in hand; they work best when used in tandem.

According to the 70-20-10 principle, one of the Holy Grails of effective education in the workplace, formal training represents a mere 10% of learning. While it’s easy to check it off the to-do list, it won’t be able to achieve maximum impact by itself without the appropriate follow-up.

The same model posits that coaching, as a fast-follow after training, actually represents double the learning (20%) opportunities as training.

In short, coaching should not be under-estimated. 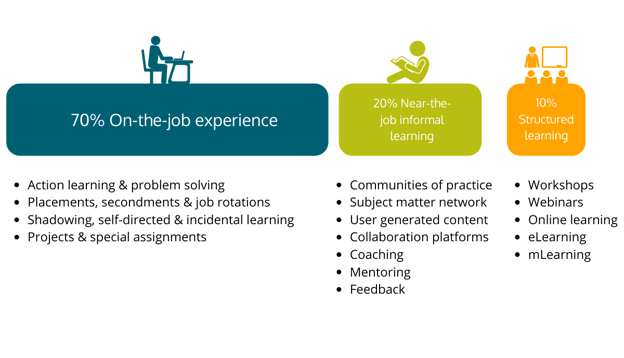 Image based on the original from Paul Kaerger, located at this link https://pkms.co.uk/2017/06/use-702010-principle-training/

Along with communities of practices, mentoring, feedback, and chapters, coaching -- in all of its forms -- can maintain learning momentum. Instead of falling into a post-training lull, those being coached continue their education by learning from others. 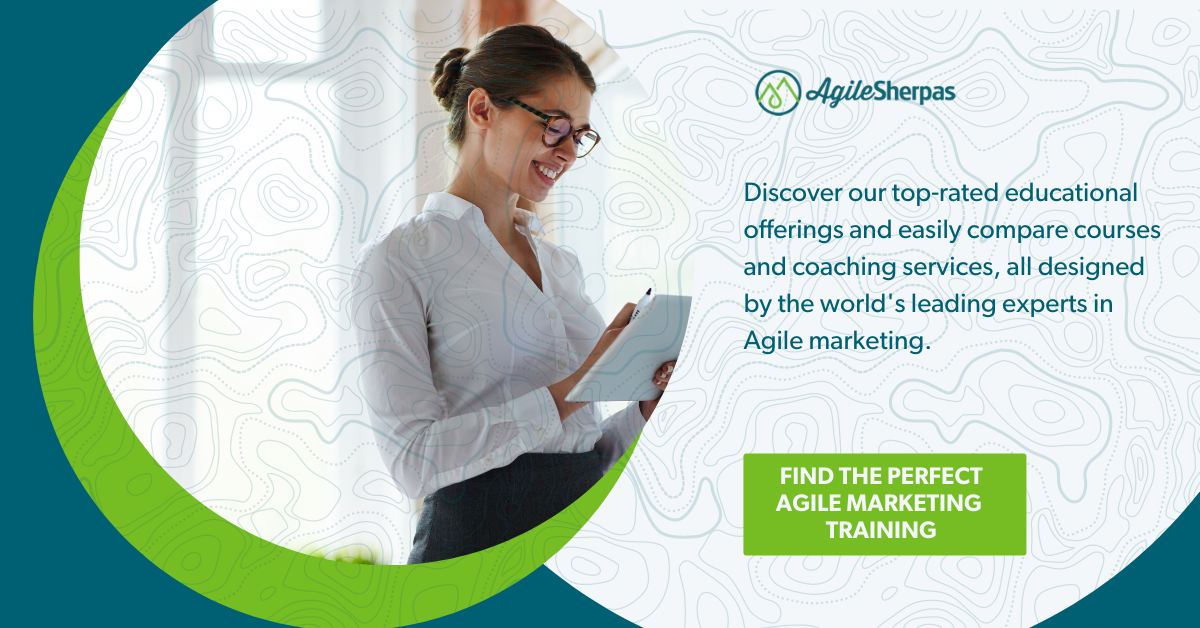 One of the most successful frameworks for team coaching is the OODA approach, a cycle of observe-orient-decide-act.

Image based on the original from Visual Paradigm Online, located at this link https://online.visual-paradigm.com/es/knowledge/decision-analysis/what-is-ooda-loop/

Originally developed by U.S Army Command John R. Boyd, this method maximizes the impact of coaching by using it to validate or invalidate our assumptions. It equips the team to learn and act in the following cycle:

Orient by gathering insights for greater orientation to formulate an hypothesis, which will be validated/invalidated before the team commits to it and starts constructing a goal.

Deciding on a pragmatic goal or problem in order to act accordingly and solve the challenges given the context of the team.

Acting according to the data accumulated in previous steps, and within the parameters of a document plan.

And of course, across this cycle the team is using clear and actionable leading and lagging indicators to collect metrics from previous actions.

First and foremost is the support for organizational leaders that only coaching can develop. While training is delivered en masse, getting one on one time with an expert mentor can help prepare your future Agile leaders for their pivotal roles in the Agile transformation.

Nothing will make or break your Agile transformation faster than leadership support; don’t leave them out of your coaching plan.

When it comes to Agile, continuous improvement is the name of the game.

An effective coaching approach will assess your team’s Agile maturity and provide recurring suggestions on areas for enhancing your Agile practices.

One of the most significant post-coaching challenges tends to manifest as a challenge to facilitate Agile ceremonies to keep the process flowing. An experienced coach can step into the team to facilitate daily standups, reviews, retrospectives and/or planning sessions.

After the coach models the Agile mindset and behaviors for a few cycles, the team can take them onto itself.

Prioritizing Coaching for its ROI

Few marketing departments have a line item for “coaching” in their budgets, but its impact has been well documented.

Statistically, organizations that invest in training alone experience a 22.4% increase in productivity. But, when combined with coaching, that figure rises to 88%, according to Gerald Olivero, Denise Bane, and Richard Kopelman in their article “Executive Coaching as a Transfer of Training Tool” from the journal on Public Personnel Management.

Fortune magazine agrees, providing a conservative estimate of the monetary payoff from coaching according to a sample of managers queried.

Respondents in their survey describe an average return of more than six times the cost of coaching.

As early as 2001, the findings from a Manchester, Inc. study also demonstrated a 7-fold return on investment from coaching.

If the stats support the high impact of coaching, why isn’t this mode of learning higher up on marketing leaders’  lists of priorities? There are three common reasons.

Unlike training, coaching gets a bad wrap because it seems messier. Coaching commitments rarely have a clear end point or a final deliverable that can be pinned down before coaching itself begins.

Coaching happens “on the job,” which means it’s influenced by situations that occur inside the team. Its structure therefore has to be more fluid than training, because it’s constantly responding to changing circumstances.

For marketing leaders, this ambiguity can be daunting.

But if they can overcome their uncertainty, they stand to gain major ROI on the investment.

Don’t have a culture of coaching

Many organizations are more used to the trainer-led learning model that’s at the heart of training. Coaching features a learner-led approach instead.

For this reason, many marketing leaders overlook the potential benefits of coaching. But when they do, they’re passing on amazing benefits like increased employee engagement, higher motivation, and improved business performance that come with bringing in a workplace coach.

Even if it’s not the norm inside the organization, stepping outside of your comfort zone and bringing a coach into your team has the potential to support your team members and guide them towards competency in a healthier and more sustainable way.

All Resources Get Allocated to Training

Setting aside the appropriate amount of resources for coaching before training begins requires some foresight up front.

Consider your budget for education as a whole, then, as an extra layer, evaluate the best ways to balance it out to cover the whole breadth of your training/coaching mix.

Managing training and development resources, which often represent 2-5% of a company’s salary budget, will mean creating a plan that includes coaching and not just training.

Look for organizations that provide training as well as coaching services for a package deal, as well as a partner that shares the same philosophy as you about the importance of keeping learning momentum building after official training is over.

Statistics from the U.S Bureau of Justice conclude that companies who combine coaching with training increase employee productivity over 80%.

In fact, all the data indicates that both training and coaching learning approaches represent essential parts of Agile marketing success. They effectively complement each other.

First, training sets a strong foundation of shared understanding among team members inside the organization. Then coaching ensures retention and appropriate application of the theory.

One without the other hides many risks of failure that marketing leaders should not underestimate.

Overlooking coaching, or the need for balance in the training/coaching, mix will mean many missed opportunities. It might even mean the chance that expensive training investments will lose momentum without follow-up coaching.

According to the Harvard Business Review, “Coaches are no longer hired to usher toxic leaders out the door. They’re coming in to develop high potentials, facilitate transitions, act as a sounding board and address derailing behaviour.”

In those crucial first 6-18 months of your ascent towards true marketing agility, your teams will need exactly these types of support to make sure that what they learned in training actually makes it into their day-to-day reality.

How to Stay Agile Over the Long Term

Agile Marketing is the Answer to Marketers’ Woes: Data on Why